First day is easy, right? Just get my ass and all the luggage 200km to Brno to see Petr. Then we'll see what we have redundant to take only the necessary stuff. Then we'll have a sleep and leave early in the morning. At least that's the plan... But plans never succeed!
Only after about 500 meters I discover that something is not right. When i leave hold of handlebars they start to swing like mad. When i catch it back all is back to normal but something here is wrong... Tires have been changed few days ago but there was never issue like that before. What should I do? On the way to Brno there is a Touratech shop near the highway so I am going to stop for some advice. Quickly we've found out that the front rim looks damaged and only thing I need to fix the swinging of handlebars it is to remove the top case which will put the weight down. That's great to know but I need that top-case! The final solution is simple... Leave only few lightest things in topcase and hold the handlebars all the time. I got the feeling that things are screwing up from the start but I am not the one who just give up on the beginning. 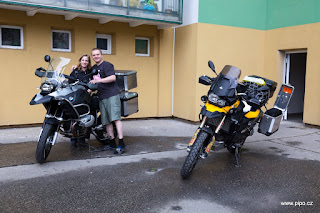 When I will get to Brno I hope to see Petr packed and ready. We'll just to have a few beers and shots of Slivovice to start the engine at 6am. We both wanted to make first 2000km quickly to be in Istanbul in 2-3days.
The reality is different after 3hours I am in Brno. First 214km of the worst highway (D1) from Prague to Tehran is behind me. Petr isn't packed yet and starts at midnight after we return from pub. Hopefully Hanka, Petr's girlfriend, was there to help with packing. And so after few hours of sleep "We are steady"...