Long Way to Persia - Part 4: Welcome Back to EU!

@#$%^&*()(*&^}{":|||O||||G||||||||o|| ... WHAAAAT?!
I hate alarm. And only thing I hate more than that is early morning alarm after some party! I love to sleep but there is only one thing I can do and that is to wake up. Cos now, if it's not me then nobody. Petr loves to sleep even more than I do so I have to be the responsible one on this trip. And the worst is that there is no other choice... We have a problem right?
Did I told you how we gonna solve the broken helmet? I told you about Attila, right? Friendly guy from Serbia who works in Hungary. He must have the helmet but we couldn't reach him. I forgot to tell you we have actually got into contact with him last night and ask him for help. He gladly offered his old Nolan helmet to lend it to us. And even more... He offered that we don't have to return back to his house in Subotica. Only thing we have to do is to wake up early and his brother will bring it to Novi Sad for us. Amazing!!! Well, it would be quite simple if there is no hangover. But I feel drunk like hell. I finished drinking few hours ago and as far I remember there were plenty of shots. One of the Serbian girl was trying to made me drunk but before she succeeded she end up talking to the toilet with head inside...
OK, we have to go. I don't even remember getting onto the bike because I never ride drunk. Last time I did that I was 19 and ended with broken motorbike and no driving license for 6months. Now on such a trip it's really the most stupid idea because I could loose my driving license just few hundreds km from home and the trip is over. Anyway Petr needs help so we go to the meeting point and wait for the guy. I am still dizzy and only thing I am thinking of is sleep. Finally Attila's brother - Arpad arrives and gives us the helmet. He also takes our broken one so that we don't have to carry it with us. "Thanks, we're saved!" ... 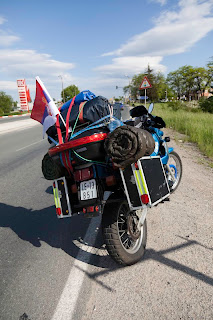 Wait?! What? He says we have to go early to cross the bridge over Danube river before it will close. There are some road works so we have to go before the scheduled close. This sounds like an important information but the problem is - I am still drunk! Whatever. "Forget it! We have to go." ... We agree to have some sleep at first possible stop behind the bridge so we start our engines and tries for luck...
The route today is even more boring than the day before. I am tired and it makes everything more complicated as I am getting sleepy. Everything changes on the border with Bulgaria where we meet few more bikers. After initial chat we discover that they're Serbians who are going to some big motorbike festival near Sofia where should be concerts of rock bands and thousands of people. Soon we forgot about our plan of being in Turkey late today. Vision of another party, this time bikers open-air party is tempting. We change a lot of money on the border so that we can party hard and continue with others  slowly to Sofia. It looks like the bad luck is over so we forgot about all the bad from past and thinking only about what will happen. In front of Sofia we meet some other bikers and let them leads us to the place. After many stops and many discussion we discover that there is actually no party. :( The festival has been canceled from unknown reasons. Swear words goes by and as we realize that the lucky time was actually very short the disappointment is back. There are two options - Stay in Sofia, find hotel and spend night with these guys or other - Move forward and at least do few more kilometers. 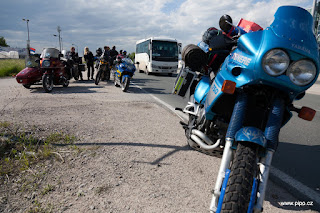 We decide to go... The capital city of Bulgaria was not really one of our destinations and we've seen pubs yesterday already. As we move to closer into town there is an ugly slum with some building burning on the entrance. The city becomes to look like some parts of Delhi or Mumbai not like the capital of the EU country! To avoid more traffic we turn left on the bypass. Road leads us many kilometers all around the city. It is dirty, full of holes and whores all around the road. Literally there is a prostitute every 100m. Ugly gypsy prostitute. This can't be EU... is it? Petr drives near the car in front of him and underneath it deep hole appears. Too late to do something!  Sound of big bang but he's fine... Only front wheel is hit but there is no damage. We're happy we decided to move as far from Sofia as possible.

After about 100km further we discover nice old Russian plane MIG next to one petrol station. We take pictures and discover that this may be the place to camp. Very small petrol station is actually the place where truck drivers sleeps. So that there is a small restaurant, showers and also a place where we could build our tent. Everything seems perfect now and because Petr is snoring like a hell-lord only thing I am thinking of are the Serbian girls... Probably the last beautiful butts we have seen for following weeks. 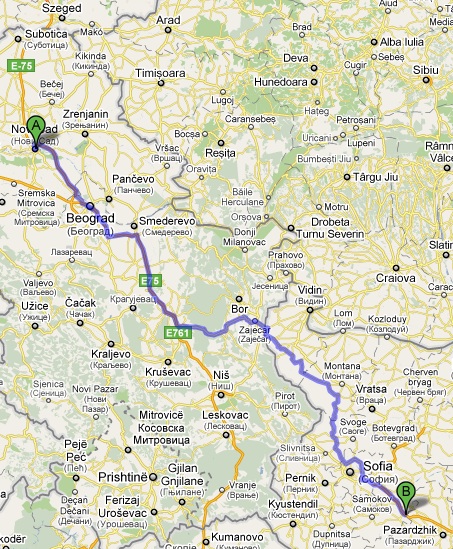 Early wake up is not good after drinking Slivovice but there is no choice. It's necessary when you want to make 2000km in just two days. Today's plan sounds simple. We'll try to cut as many kilometers as possible of that big number. 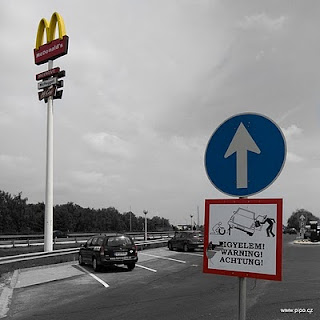 The rest of Czech D1 leads us to Slovakia and first stop is later at the border. There we have to pay for Hungarian roads. Driving the highway can get boring but we have intercoms and Petr is a funny guy with loads of jokes in his pockets. After some time Petr realize that his big BMW 1200GS Adventure takes much more petrol than he's used to. He had non-Adventure version before which took less than 6liters per 100km but now this is about 7liter. He swears a lot to the helmet so I turn-off the intercom  and stop at first petrol station. After few calls we discovered that this is probably normal and decide to continue. But Petr is not happy. This will make trip of 12000km a lot more expensive! Nothing interesting in the rest of Hungary as we decide to skip the lunch break in Szeged for some goulash...
The border crossing with Petr is always quick&easy. He works at Czech customs office so he has colleagues at every border. And he's not shy to talk about it everywhere :-) After couple of minutes we're out of EU in Serbia. When trying to find for some information about the toll for highway we meet very friendly guy. His name is Attila and we discover that he has a BMW motorbike as well. He leaves a contact details with us to stop by on the way back in Subotica where he lives or in Szeged where he works. We appreciate his friendliness but doesn't know how it will change our near future. After few km we can see that weather will change. Until now everything was perfect but there is a wall of dark clouds is approaching. Because there is no place to hide we stop on the parking to take cover against rain. The wind is getting stronger and everything is up in the air. Petr tries to dress up and leaves his helmet on the table. This was a big mistake! His new Schubert helmet for 400EUR is falling down and soon we discover it's badly damaged. The joint is broken and there is no way of repair! :( 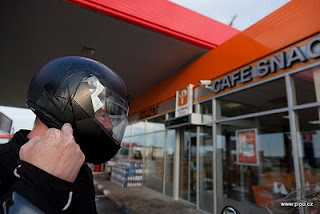 We ride with broken helmet to the first petrol station and wait until  heavy-rain is over. My solution is always about duck-tape but this time it's only temporary. Our will to continue is strong and the best solution is to try to reach Attila and ask him for his help. He must have a helmet if he has a bike. Unfortunately we're unable to reach him on the phone so we continue to the first bigger city on the way to find a place to rest.
On the entrance to the city of Novi Sad it doesn't look good and only adds bit of depression to the mood together with bad weather and all the problems so far. We're happy not to accept first offers for accommodation and continue to town center. There we found a guy who is not afraid to bargain for lower price. After some time our bikes are in garage and we have nice small room in town. Let's try the local pubs leads Petr! Soon we discover that Novi Sad is actually very beautiful old town full of young people. And I must recommend it, it's really worthed to visit. I must also recommend that every man accommodated with lady by his side should take dark sun-glasses while visiting Novi Sad. We were sitting some time in the pub garden and played a game of "looking for ugly girls". Hundreds of people were passing by and we counted about 4x girls together in one hour. Yes, Novi Sad have better ratings than Prague and Bratislava all-together! ;-) The mood got much better with alcohol levels rising up and the night went on for a long time. At least for me who managed to get lost in the city while walking back to hotel after they closed all the clubs... :-) 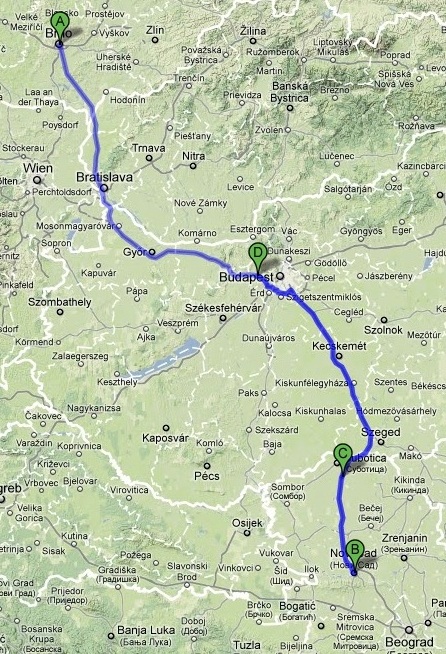